Who is Rod Craig?

I grew up and continue to live in North Vancouver, British Columbia. I also work for the City of North Vancouver, as a development technician. I swam as a competitive swimmer from age nine to twelve.  It wasn’t until I was 37 years old and in much need of a “life style change” that I decided to swim again. After joining the local masters swim program, I soon found myself competing at local swim meets and open water events. I have always felt at ease in the water and soon became addicted to workouts in the pool and in the ocean. Running used to be my outlet, but swimming has taken me to another level. I lie in bed most mornings and think… should I swim or sleep? Nine times out of ten my feet hit the floor and I’m looking for a water workout.

I have always had a desire to face my fears, test myself or just hard line things, so when my friend Brent Hobbs declared that he would attempt the Channel I started to get nervous and excited because I knew I could be next…

Midlife may be denied but not escaped! Do I really have to give up who I think I am so I can become the person I was meant to be? Is midlife about searching for the true meaning of life or is it an opportunity for a spiritual awakening?

At 49 years old, I feel that I’m half way to where I want to be, but at the same time I’m somehow comfortably stuck right where I am.

Why Swim The Channel?

I told my doctor I was going to swim the channel and without hesitation he said “why”? I can’t pinpoint exactly why, but I do know that I don’t want to reach a point in my life and think that I never achieved something simply because I didn’t even try. Failing that, I am one of those people that can get talked into things quite easily…

I remember telling my mom that I wanted to someday swim the Channel and without hesitation she said “Rodney, if you do that I’ll shoot you! ” This was somewhat of an overreaction, but she always worried about me, when swimming in the ocean. Helen has since passed away so she won’t be able to shoot me, but I have this feeling she will be there for the crossing anyway… 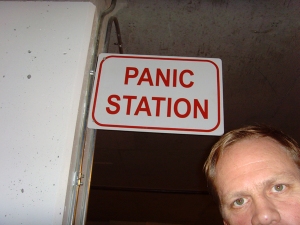 We all need help…

I normally just “wing” things, but for the channel I will take a different approach… HELP!

One of the first things I wanted to do was surround myself with the right people. If you could assist me in reaching my goal, my plan was to secretly line myself right up with you. If your favorite color is blue, imagine that…mine too!

Brent Hobbs is definitely one of those people. At 42, he is a growing legend among our swimming community and has a number of swimming feats under his belt already, including the English Channel and Bowen Island, not to mention his indoor swimming accomplishments to date. In the summer of 2008, right after he returned from his very successful channel swim he told me that I could do this thing if I really wanted too. This would be the defining moment that would concrete my decision. I will be forever in his debt for all his experience, wisdom and support leading up to my attempt. I have now ordained him as “Spiritual Advisor”.

Preparation for the Channel

The first thing I had to do before this whole thing could unfold was to take inventory. I had to recon with what I have. Do I have a full time job? Yes. Do I have children? No. Do I have a significant other? Yes, her name is Bonnie and she is my beautiful fiancée. Am I financially independent? No. How much free time do I have to train? These are the questions that set the tone. I don’t want to get myself into a situation where I’m burned out, so ultimately, I have to maintain a balance between training and life.

One of the secondary goals that I want to focus on is swimming the distance freestyle events at the Canadian Masters Provincials and Nationals. This will force me to work on endurance, strength and speed. I want to use the indoor swim season to keep focused until early spring. April and May will be a combination of indoor and outdoor training.

My friend, and one of my coaches Suzanne Scriven was kind enough to put together a training schedule for me. This strategic piece of information will dictate the next six months of training including: rest days, mileage count and tapers for both the Channel and Nationals. Putting pen to paper has made such a difference, as opposed to everything floating around in my head.

I also train with Suzanne and the rest of the “Gooey Tubes”. I know… What is a Gooey Tube? As far as we know it’s a cross between a Geoduck (salt water clam that has a very “large” siphon) and a tubeworm. Both are native species to the west coast, and literally one of the “lowest forms of aquatic life”. This unusual name is derived from a Lushootseed (Nisqually) word meaning to “dig deep”. Need I say more? Oh – our mission statement – “swim like you really care”. All of the above is what attracted me to the Tubes in the first place. They are so cool…

Truthfully, the “Tubes” are a competitive group of master’s swimmers and triathletes including one of Canada’s former Olympians Graham Welbourne. Graham was a star on the Canadian National Team and one of the best freestylers Canada has ever produced. So…like I said, the trick is to secretly line yourself up with the right people.

This entry was posted in Training and tagged Brent Hobbs, Gooey Tubes, Training. Bookmark the permalink.